In their last home game of the season, the Manistique Emeralds lost 27-8 to the St. Ignatius Saints. Above, Austin Hinkson (24) pierces the Saints’ defensive line, hits the corner and scores 37 yards, giving Manistique an early lead. Photos of Doug Troyer

MANISTIQUE – The Manistique Emeralds struck first, but couldn’t hold on, losing to the St. Ignace Saints on Friday in their last home appearance of the season.

Goalless after the first period, Manistique’s lone score was 10:31 in the second period when Austin Hinkson hit the corner and escaped on a 37-yard touchdown run. Parker Graphos added the two-point conversion, giving Manistique an 8-0 advantage at the start. From then on it was all Saints.

Responding to the Emeralds ‘score, Carson Bigger took the ensuing 73-yard kick for the Saints’ first score. The extra point failed, leaving the Saints behind by two points.

Scoring 21 unanswered points, the Saints’ second score of the night came from a 12-yard run by Ethan Mc-Lean. Completing a 62-yard run with a two-point conversion, the Saints took the 14-8 lead en route to a 27-8 victory over Manistique.

The Emeralds moved the ball well, but mistakes and turnovers gave the Saints too many opportunities. They managed to take advantage of it, especially in the second half of the game.

“I think that was probably our best offensive performance in yards for the year,” Kangas added. â€œI thought we did a good job moving the ball, but we had a few turnovers on the downs. We took the wrong number of shots several times and returned it on a few fumbles and interceptions.

With a young side without much playing threat, Kangas said it was difficult for his team to score on one big play.

â€œWe just don’t have that kind of guy who can really do that, so we have to be able to support some practice, convert at short distances and not return the ball,â€ he explained. â€œWe just need to be able to hold the 8-10 game controls and go down and score. We’re not there yet, but I think we’re getting a lot, a lot closer than we’ve been all year. If we don’t give up the big games, we seem to be performing better on the defensive end. 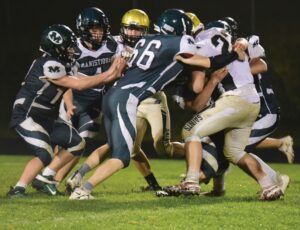 In a battle in the trenches, above, Cale Dykes (66) and a mob of emeralds take down the Saints’ Quin Brown.

This year’s team is young and made up of eight sophomores and one freshman, â€Kangas continued. â€œUniversity experience or lack of experience has been a factor this season. It’s one of those things, when you haven’t played a lot of football, to learn from your mistakes and move on.

Manistique will travel to L’Anse on Friday and finish the regular season at Iron Mountain.

Game stats were not available. In the post-game show provided by WTIQ 1490, it was reported that Graphos carried the ball 42 times for 242 yards, giving the second 600 yards rushing this season. 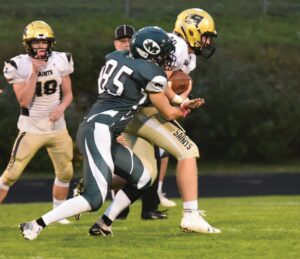 Andon Rodman saves the sack at the start of Friday night’s game. Photo by Doug Troyer